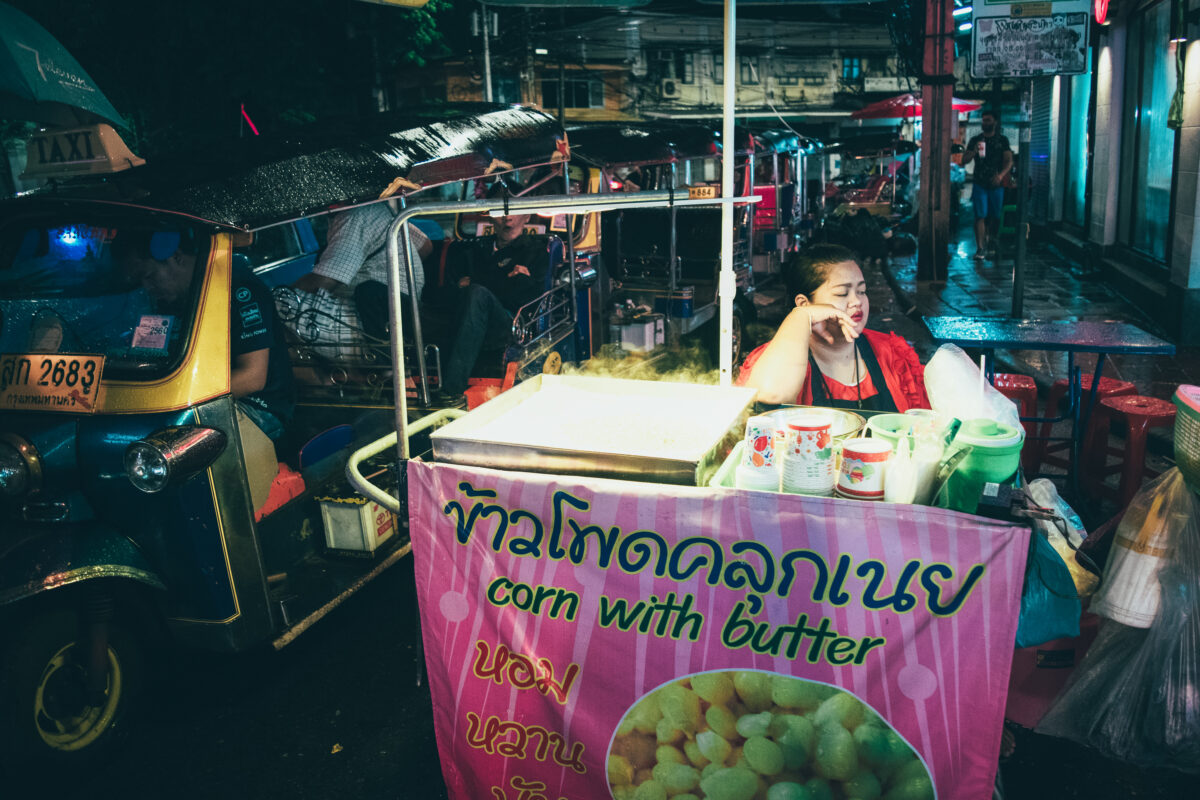 Isolation. There is a feeling of quiet isolation, a certain invulnerability, that I feel in this place. I’m hidden in a small bamboo village that sits perched atop the edge of a large valley buried in the jungle of Northern Thailand, making conversation with the children who call it their home. 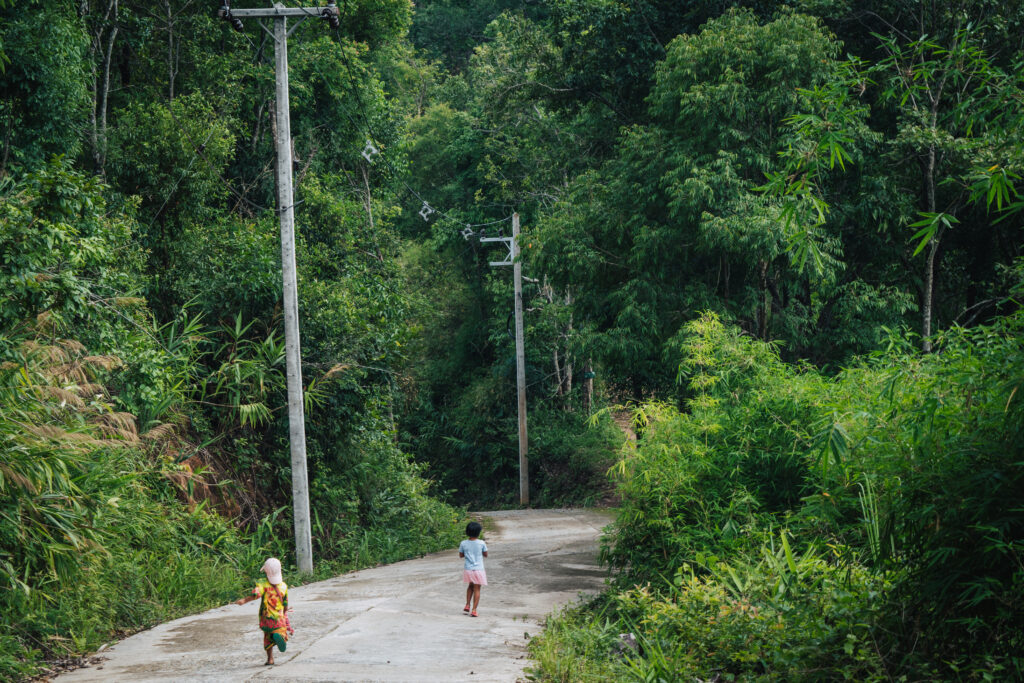 Astonishingly, these children are not actually Thai citizens, and even if they sought citizenship it is unlikely they would be granted it. The children around me were born in Thailand, but belong to a hill tribe from the Tibetan Plateau. The Lahu people settled in Northern Thailand centuries ago, yet have been shunned by most of society. Without citizenship, they cannot attend government-funded schools or secure land rights. It is also much more difficult to get a stable job without proof of public education or ID. With little money and no rights, the people of the hill tribes are of the most marginalized in the country and fall victim to one of Southeast Asia’s most sinister industries: human trafficking. 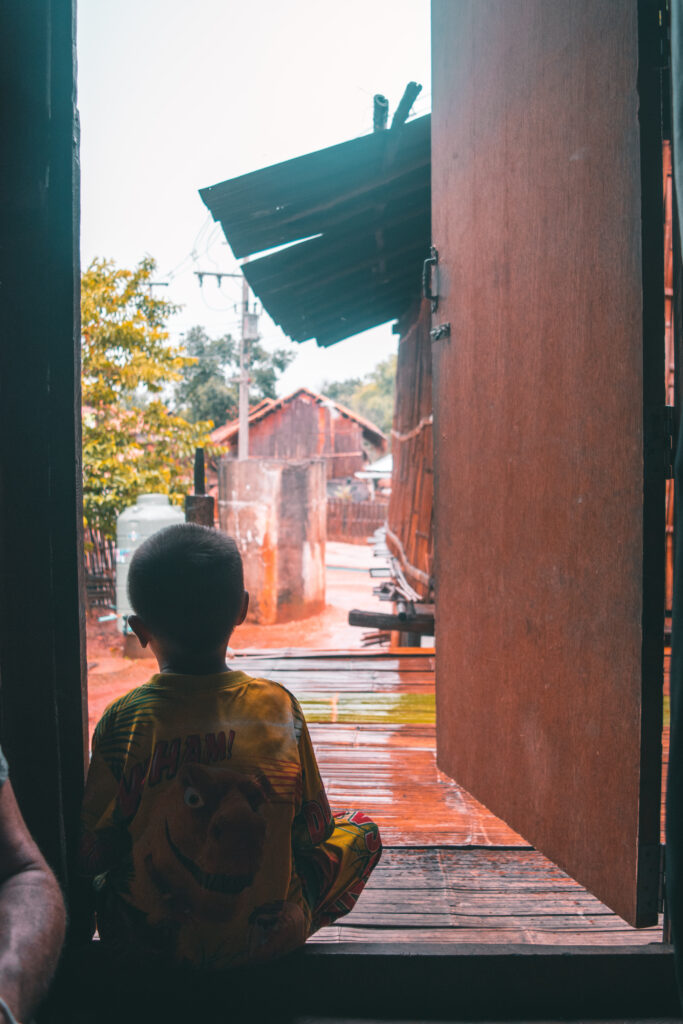 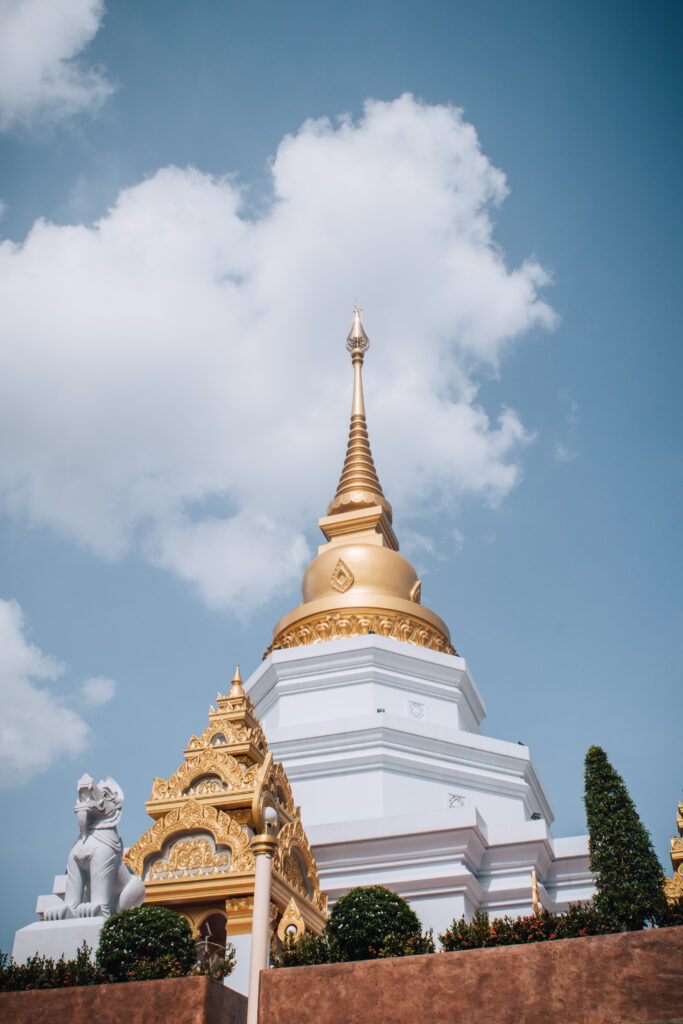 Despite prostitution being illegal, Thailand is known as the sex tourism capital of the world, and the Thai legal system can be described as faulty at best as little to no arrests for sex trafficking are ever made. This is due to both corruption and gaps in the system. For example, there are certain bars where a customer will be seated at a table and then immediately greeted by a girl. While at the table, the customer is allowed to do whatever they wish to the girl, and the girl’s job is to flirt with them. Eventually, the customer approaches the bar owner and pays a bar fee to take the girl away with them for the night. Since the customer is paying the bar owner and not the girl, and the payment is not explicitly for sex, it is not legally defined as prostitution. 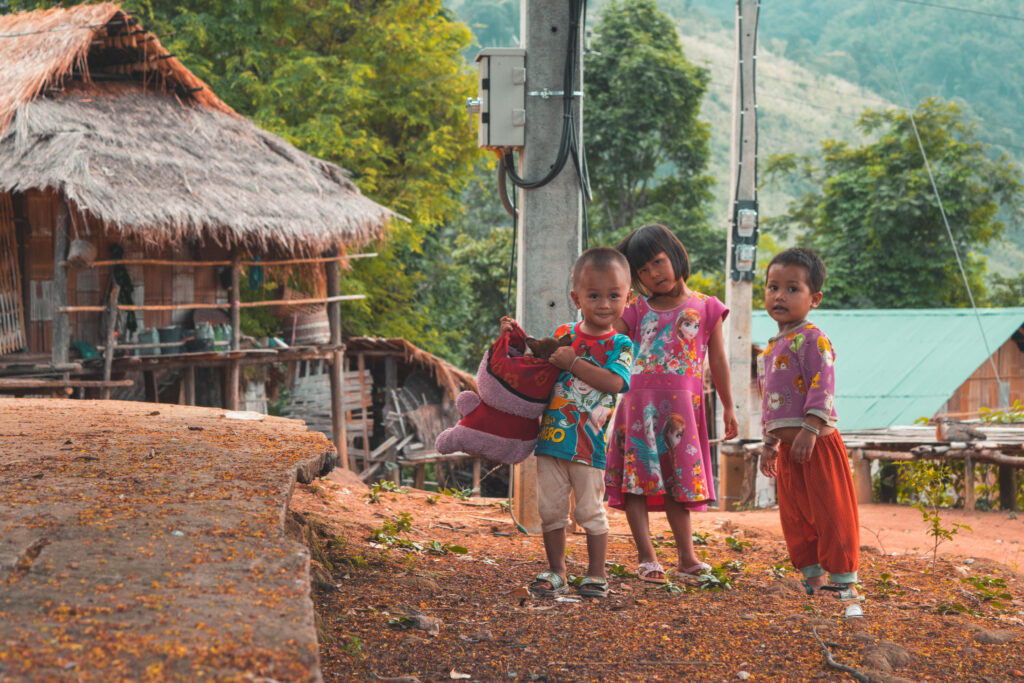 There are countless stories of hill tribe girls being taken from their homes and forced into the sex trafficking industry. When they arrive in Bangkok, they work in bars where they sell themselves to strangers and become trapped in psychological slavery due to filial piety and personal threats. It becomes a painful cycle of guilt and suffering. 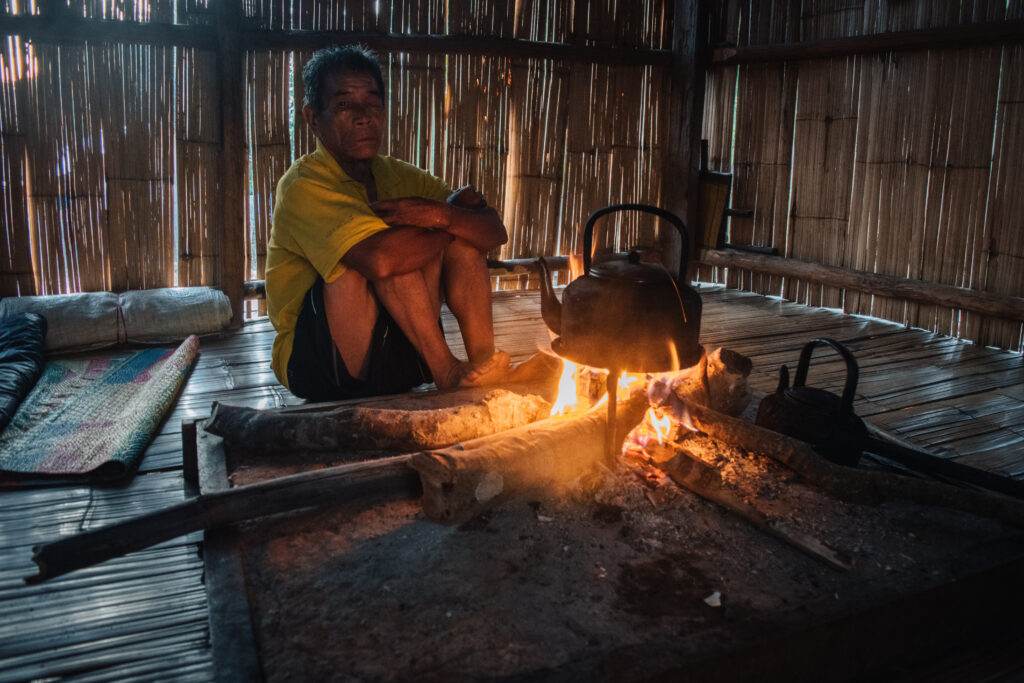 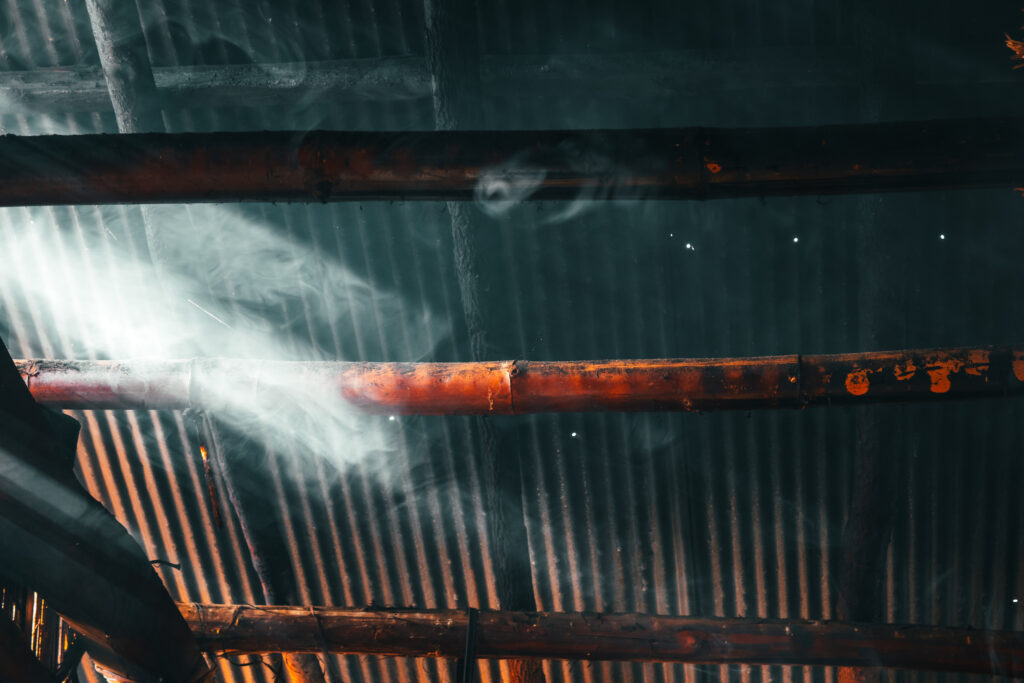 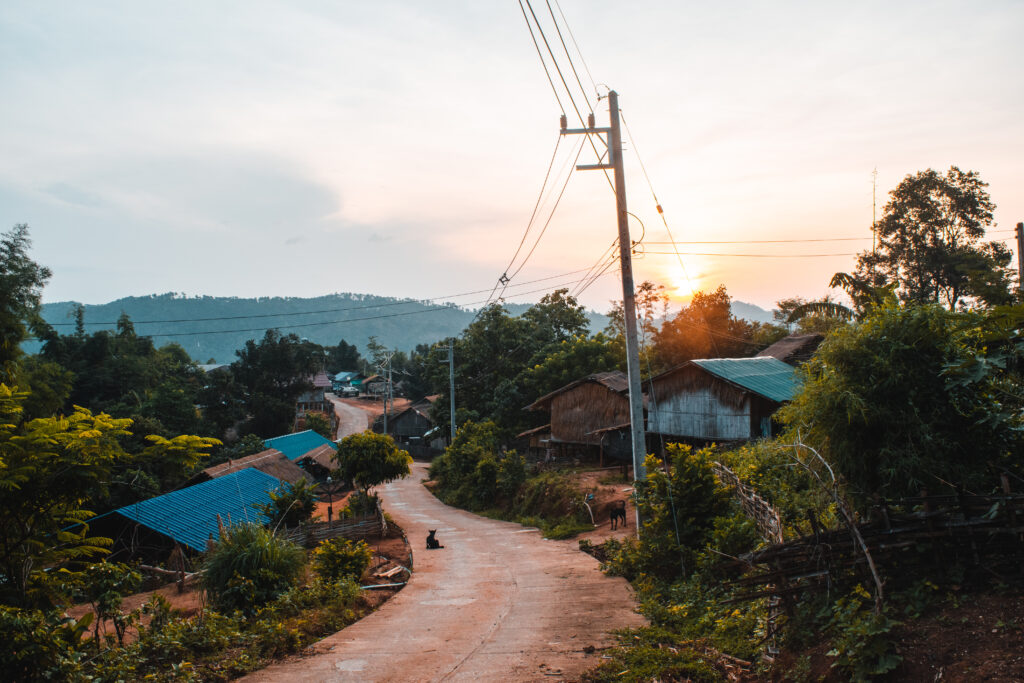 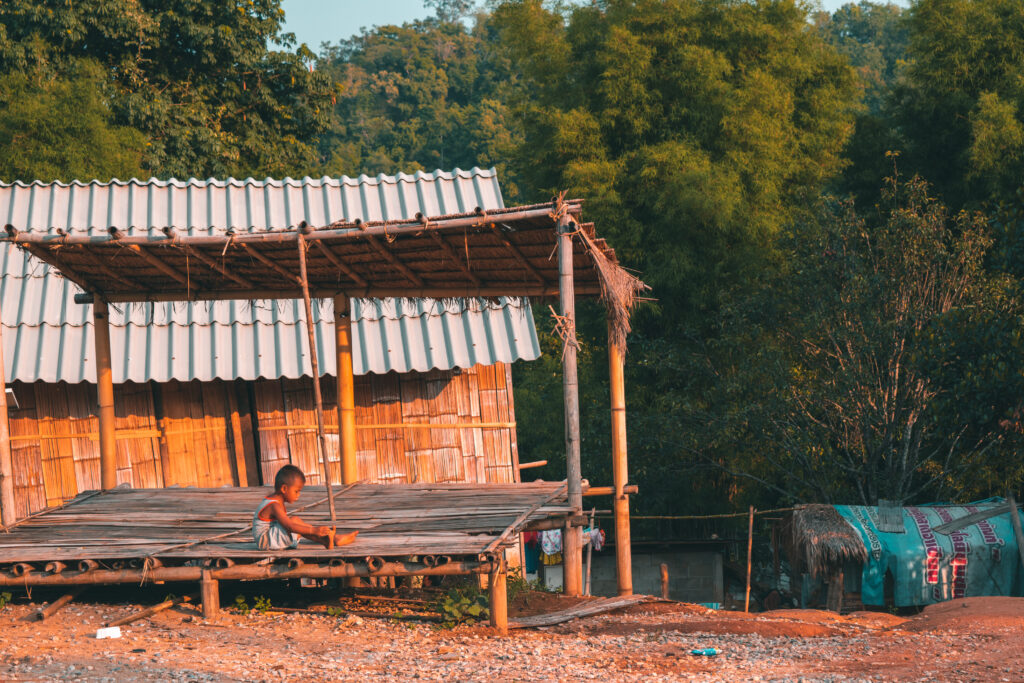 “We are coming up on Khao San Road. It’s a crazy street. There are a lot of tourists there. It’s very busy.”

Raindrops started to form on the window as the taxi rolled slowly through traffic in Bangkok. When we finally pulled up to the curb, we were met by what looked like a Thai version of the Las Vegas strip, except condensed and filled to the brim with wandering bodies. The rain continued to pour, but that did not stop the crowd of locals and tourists from flooding the bustling road. I was glued to the pavement, awestruck by what I was witnessing. 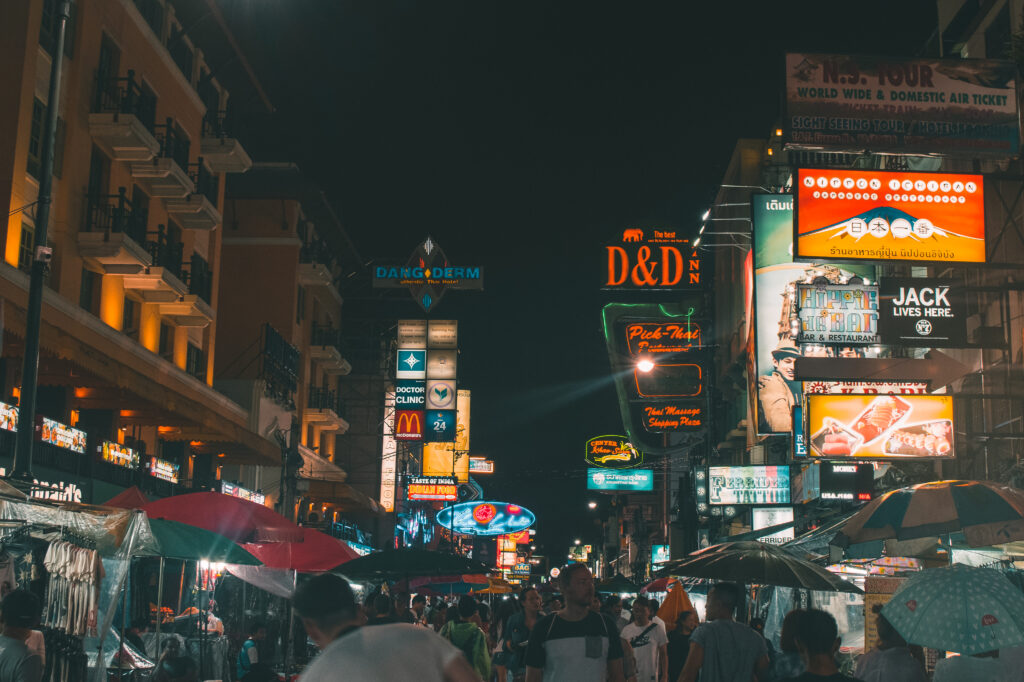 The clouds had rolled through and the storm had ceased for a moment, leaving puddles and debris throughout the city. The aftermath was beautiful. The traffic lights spiraled down into the pavement like colorful veins stretching into the depths of a dark world.

As I made my way down Khao San Road, I was greeted with smiles and laughter. There were vendors selling tropical fruits and fried meats, the steam of their grills dancing through the wind. Everywhere I looked there were nooks to explore, shopkeepers to bargain with, dance floors to enter, and travelers to meet. It all felt so poetic to me. I had to go further. 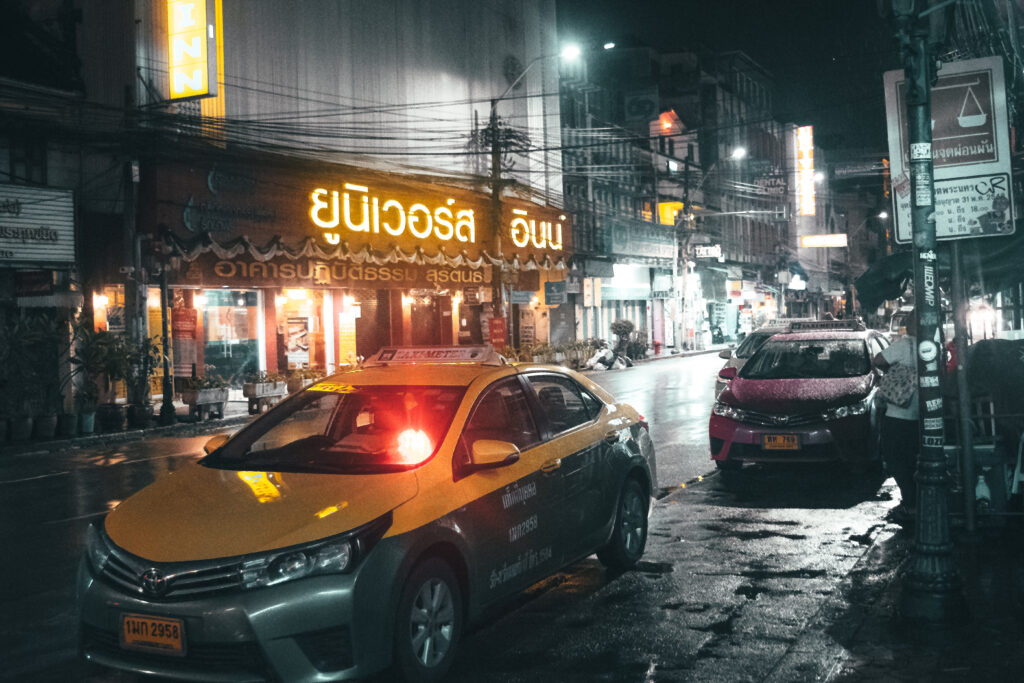 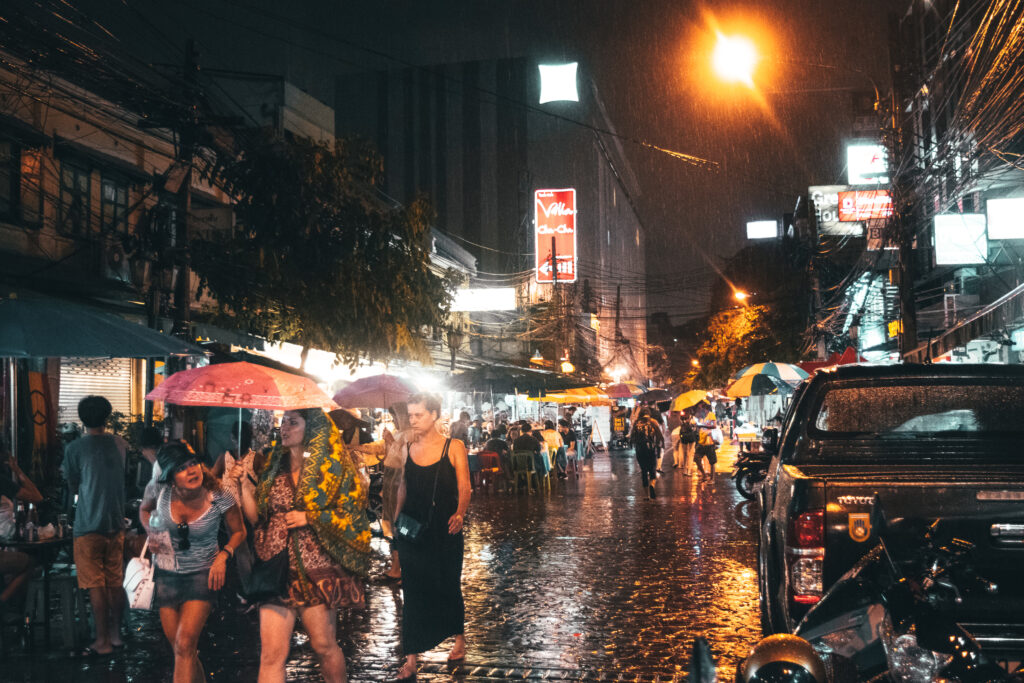 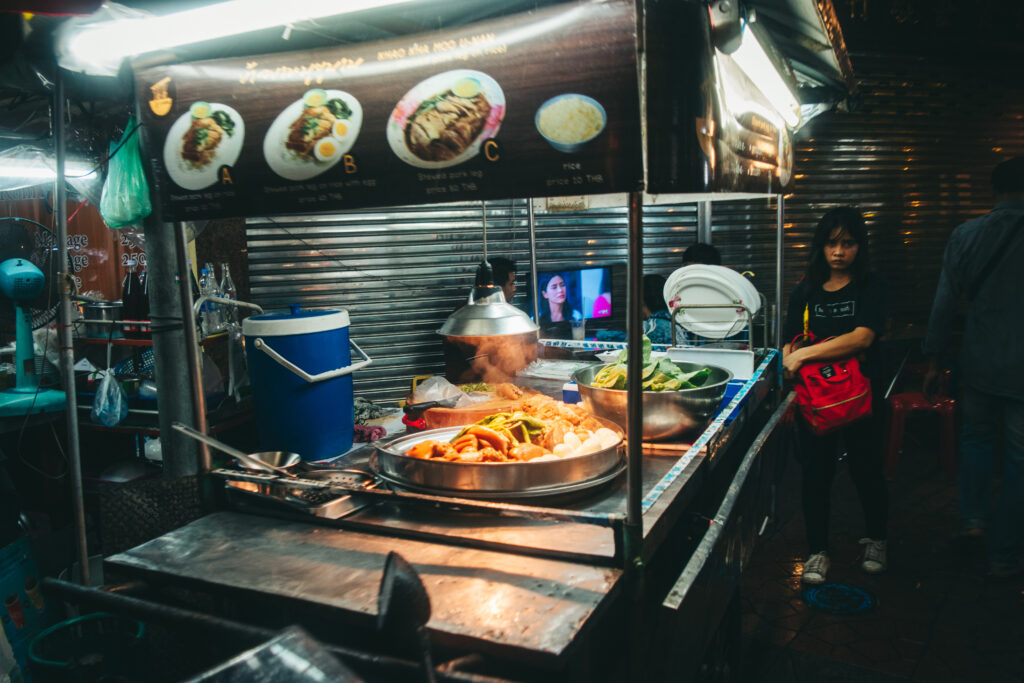 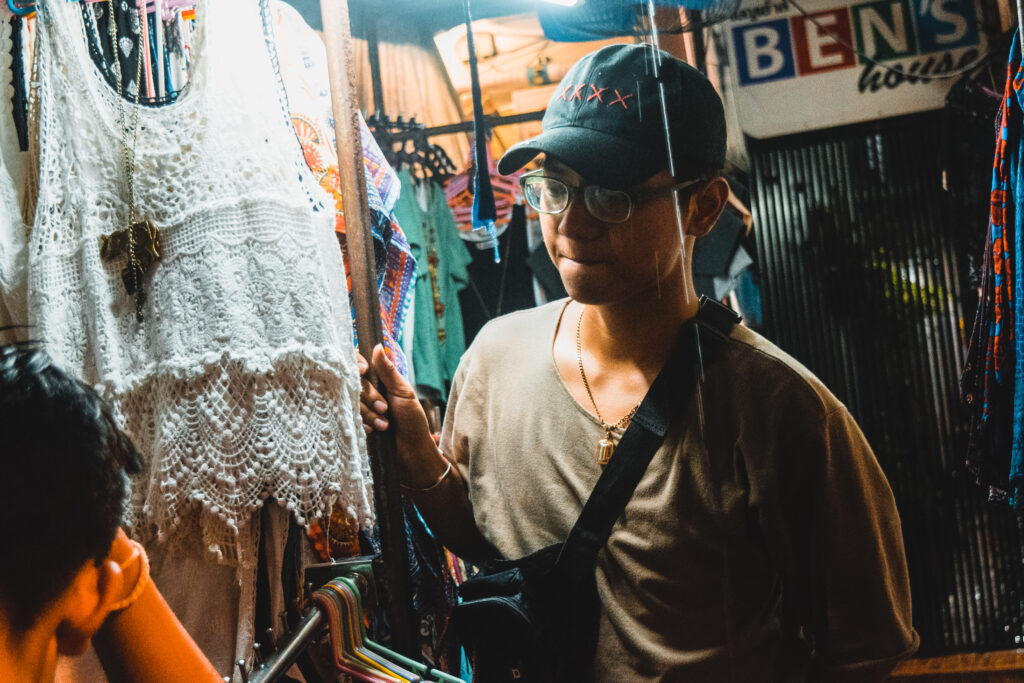 The rain returned, as it always does in the summertime, and I was caught without an umbrella. A daunting orange sign loomed above and provided a temporary shelter. It seemed as though every building was a nightclub and that the pavement itself was bouncing to the songs of the loudspeakers. The neon colors and bright lights were intoxicating, the noise relentless. I somehow felt both repulsed and drawn into the fray. 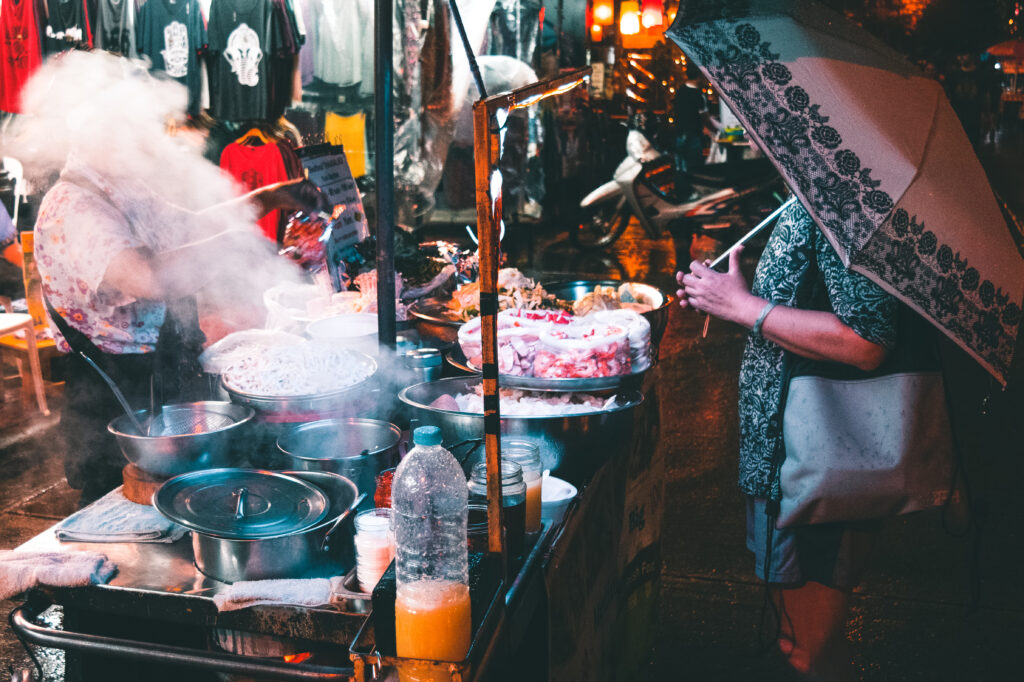 Behind the front row of buildings on Khao San Road lies a complex network of alleys and markets. The corridors were full of apparitions; ghostly figures floating into dimly lit rooms. I wasn’t sure where to go or what time it was, and I became tangled in it all. The winding wires and puffs of smoke unearthed a sullen nostalgia for a caring face. The seraphic mountain paradise of Chiang Rai felt out of reach both physically and mentally. That sunlit spectacle became just as lost as I in the dizziness of the world around me. Bars and clubs formed in the space where golden spires and palm trees once stood. A discount disco ball replaced the sun. Shady men sold produce, pottery, and people. 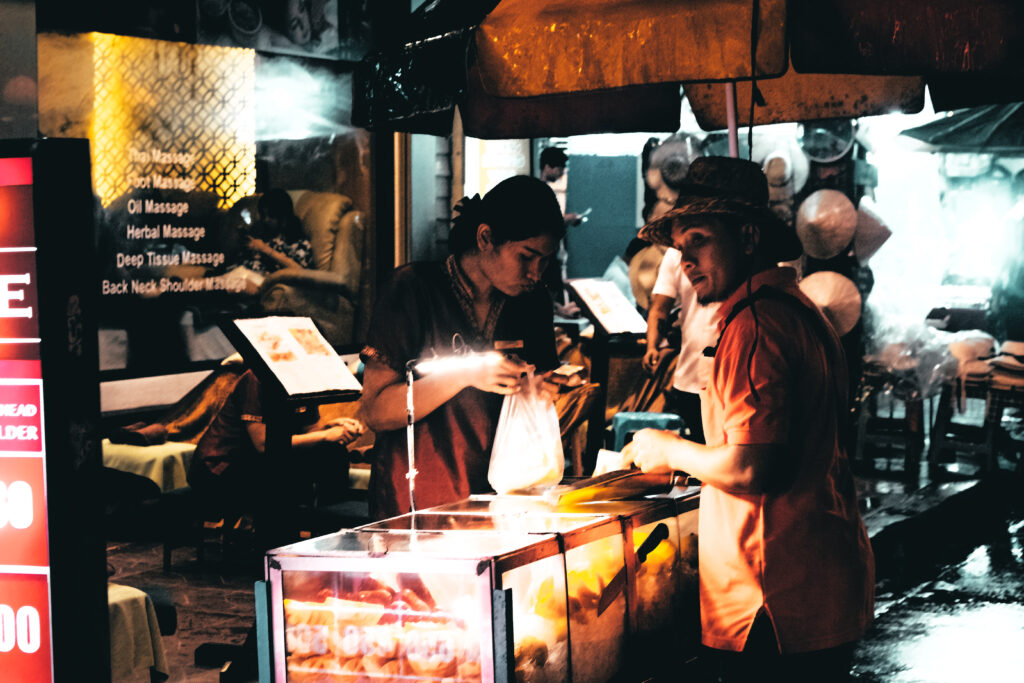 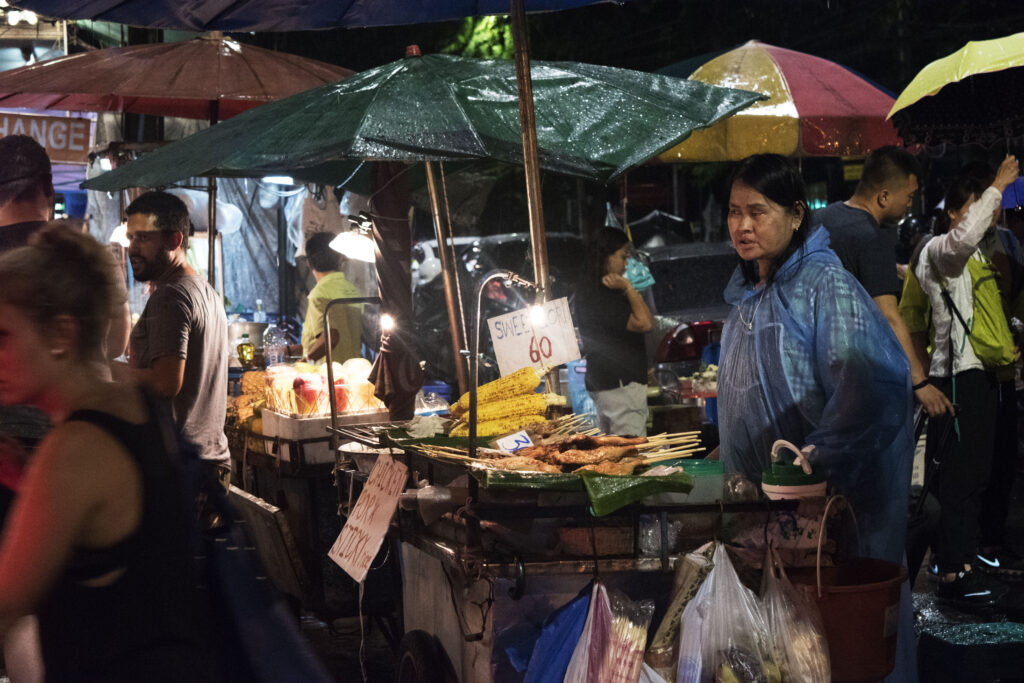 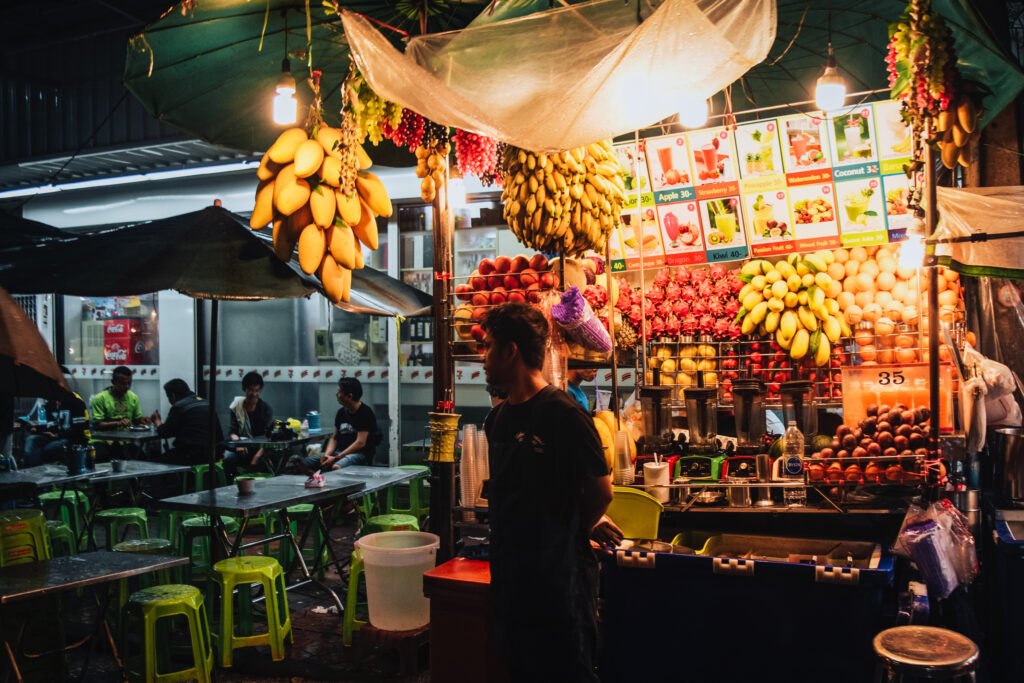 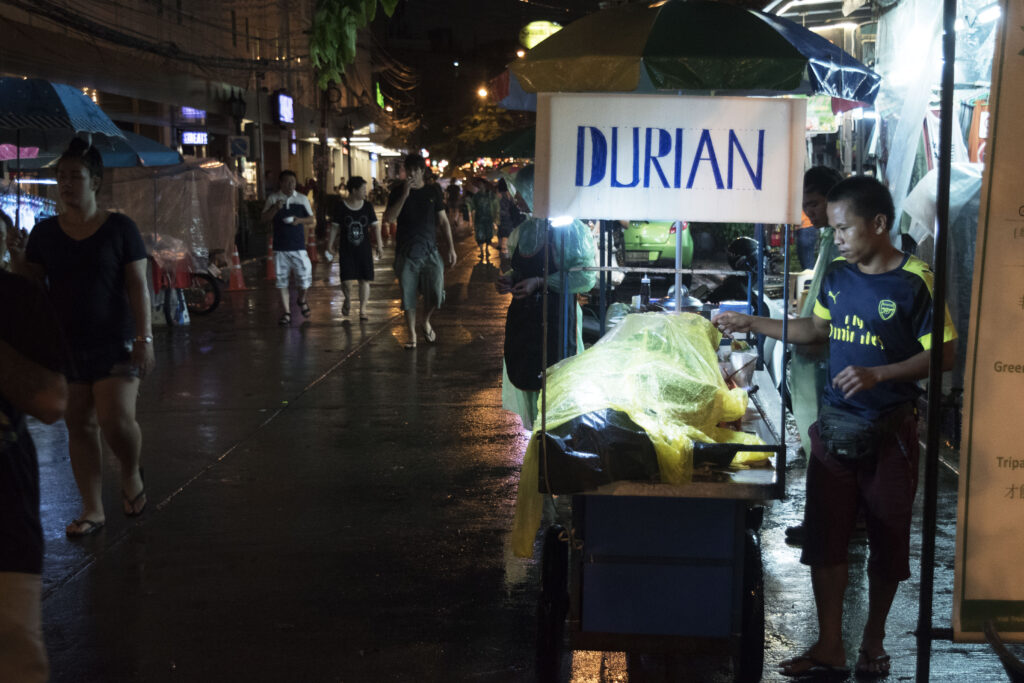 But I was not in danger. I was, in fact, the intended customer, the one who indulged, the one who robbed, the one who ruined. I was the young white male who was meant to arrive from a far away place and spend my money, fueling the human trafficking industry. I felt disgusted by this game and the role I was expected to play in it. The night became more menacing as the situation became clearer. The Thai girls around the club were not brought there by their own free will. The warmth of the bar owner was a façade reserved for the customer. The police van parked down the road was not there to protect, but simply parked as an ornament. The stories were real, except no longer just stories to me. They became images and facts engraved in my mind, never to leave. 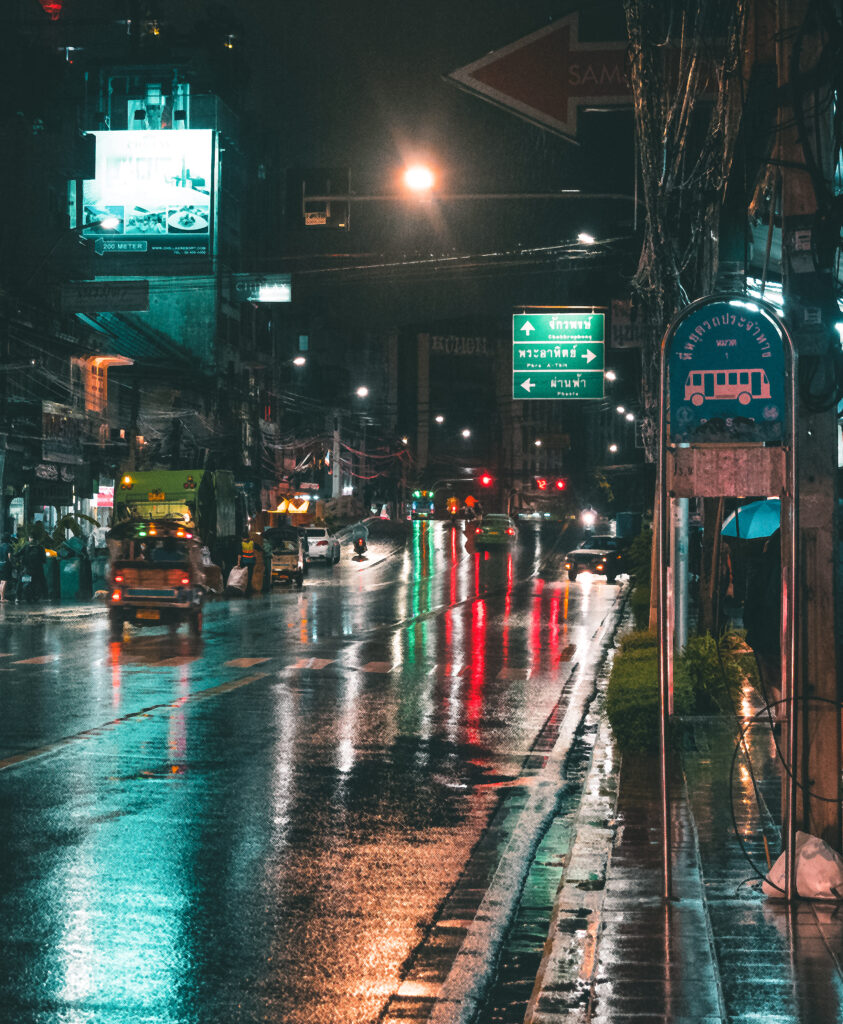 I left Khao San road late that night accompanied by friendly faces, yet the road still stays with me. The twisted harmony between the beauty and madness of it all never ceases to astound me, and I can still see the speechless mouths and longing eyes of those who watched the frenzied madness reign over their home.

Organizations and resources to help fight human trafficking around the world: