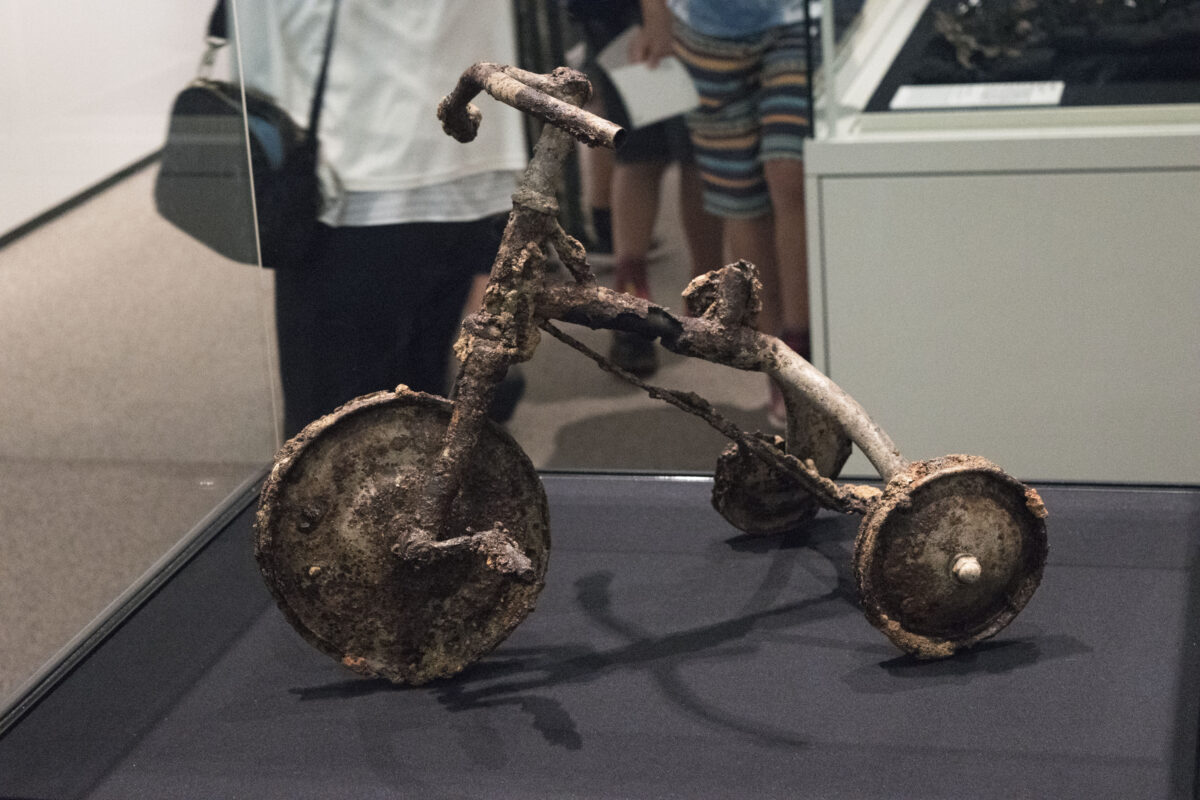 It was a gloomy Tuesday morning when we arrived at the train station in Hiroshima. After getting off the bullet train, we met our local guide and started our tour through the city. Our first location was Carp Castle, erected by Mori Terumoto, a powerful lord in feudal Japan. The carp is an important symbol in Japan and is especially popular in Hiroshima, whose baseball team is named after it. The fish stands for strength and determination, as it is famous for swimming against the current.

The drive to the castle brought us through a diverse and beautiful city. Hiroshima was built upon a river delta and has grown into a city with a heritage important not only to its prefecture but to all of Japan. After our tour of the castle, it became clear that many of the residents of Hiroshima are proud of their vibrant ancient history. However, as we passed by a collection of stone shrines and other historical relics, I couldn’t help but remember that they are not the original structures. Like the vast majority of the buildings in the city, they had to have been built or restored in the last 73 years. There was an elephant in the room that had to be addressed. It was the reason we were there, after all. 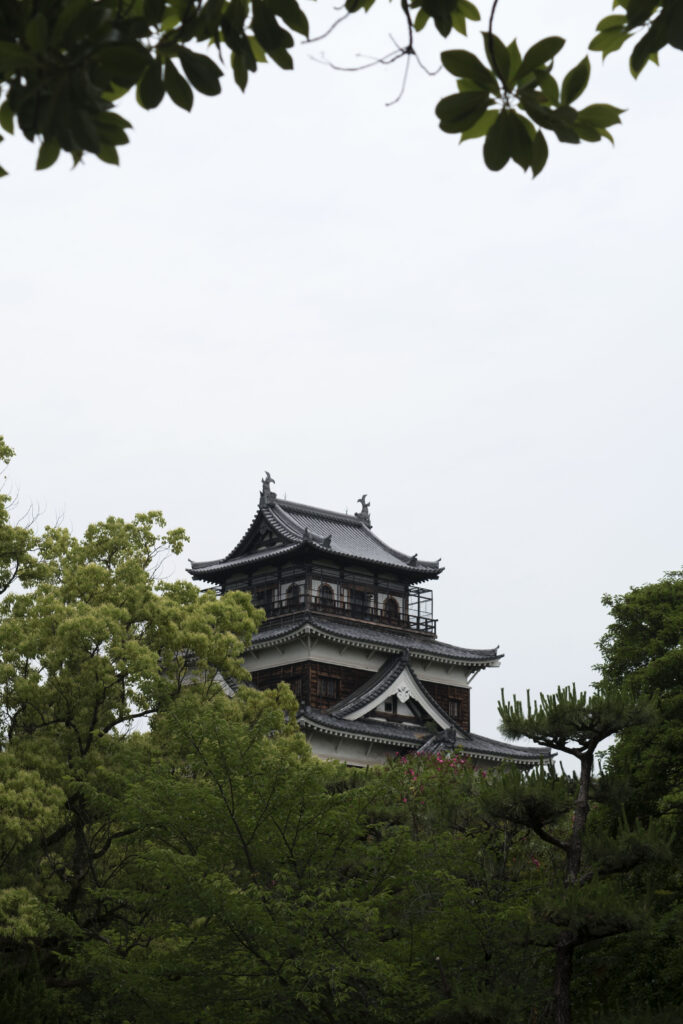 At 8:15 AM on August 6, 1945, a U.S. Army B-29 bomber known as the Enola Gay dropped an atomic bomb on Hiroshima. It was the first time in human history that the weapon had ever been used outside of testing. It detonated around 600 meters above the hypocenter, striking the city with blast wind, radiation, and heat rays of approximately 5,000 to 7,000 degrees Fahrenheit. The city was decimated and an estimated 140,000 people lost their lives. The aftermath was devastating as people burned to death in the streets and black rain fell from the sky. A poem from survivor Akiko Takakura goes:

With their mouth wide open.

It started to rain lightly as we made our way past the Atomic Bomb Dome, which stands as a somber reminder of that horrific day. There was something so haunting about the remaining shell of the building, something surreal about the mangled metal and burned stone. We kept walking and soon found ourselves within the Peace Park, a place of beautiful symbolism. One such symbol is a fire said to stay burning until the world is rid of all its nuclear weapons. It is sadly called the "eternal flame.” Next came the museum, the part of the tour that struck me the most. We strolled through exhibit after exhibit, astounded and horrified by the images and voices around us. One room showed photographs of Hiroshima before and after the bombing. In this exhibit, there was a video display of the bombing being projected onto a circular miniature map of Hiroshima. As I began to watch, a group of young Japanese students walked in and filled the space opposite of me. The video showed a colorful, bustling city full of life and commerce. Then a bomb started to fall. It detonated above the city, turning everything in sight into a black and white heap of rubble. There I was, an American standing across from a group of young Japanese children, watching an American bomber turn a Japanese city to ruin. What I felt wasn’t exactly personal guilt, it was something much more complex. I felt out of place, like I shouldn’t have been there. But at the same time it felt absolutely crucial to be standing there, witnessing what happened and learning about the devastation from ground zero. 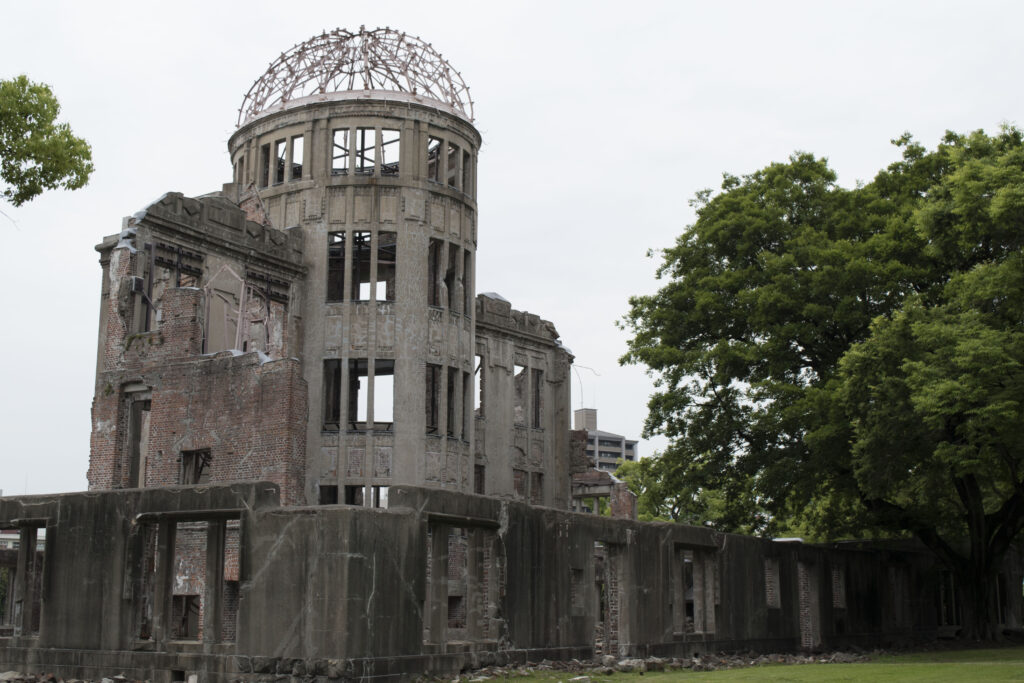 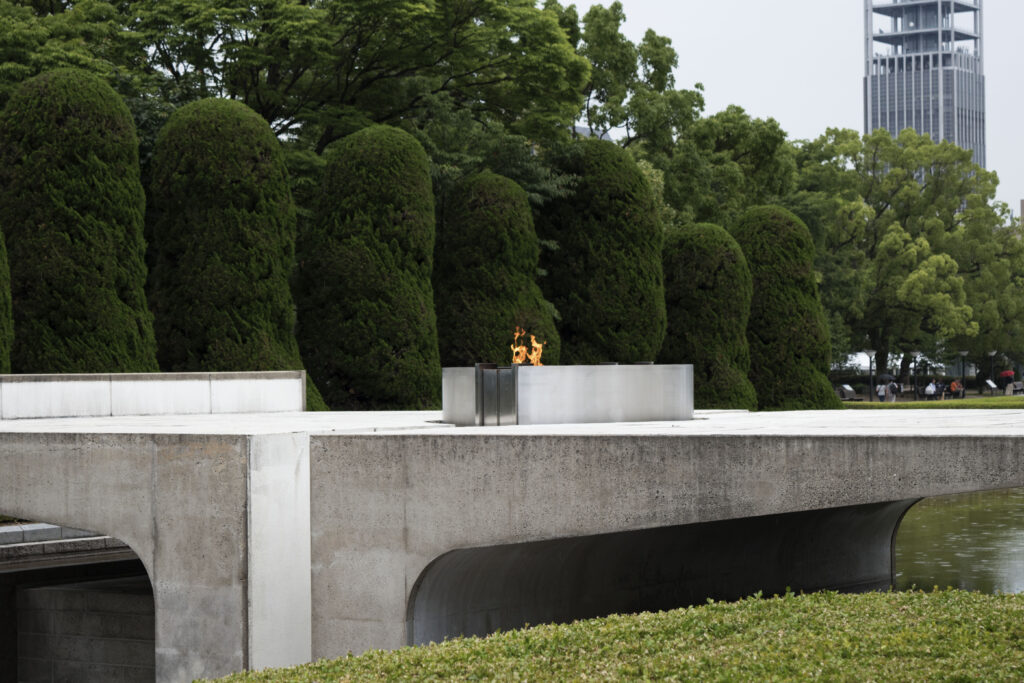 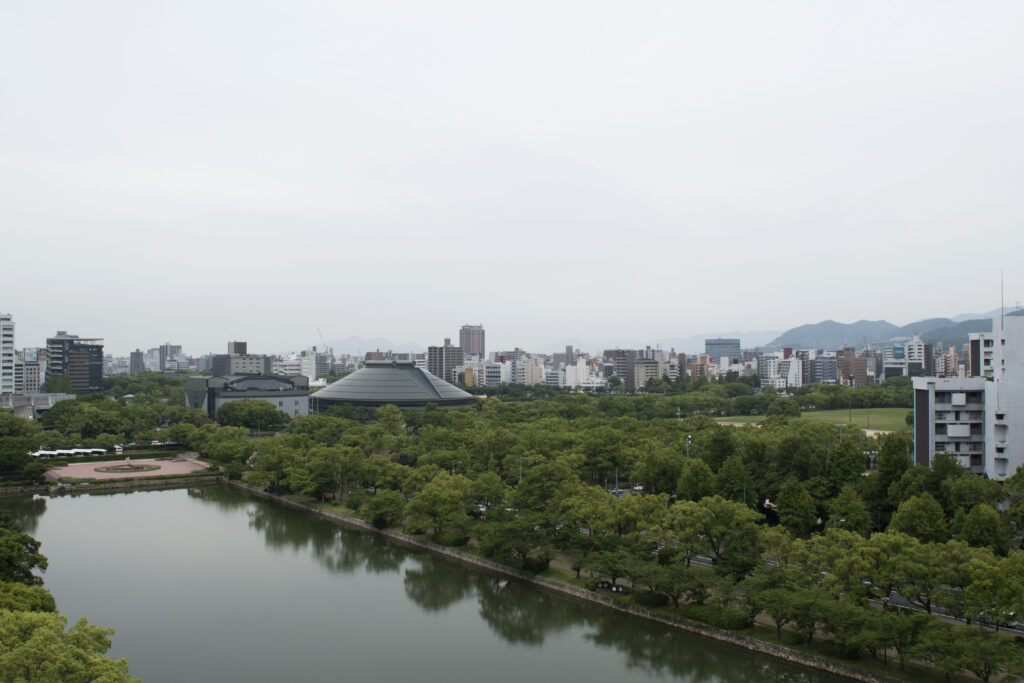 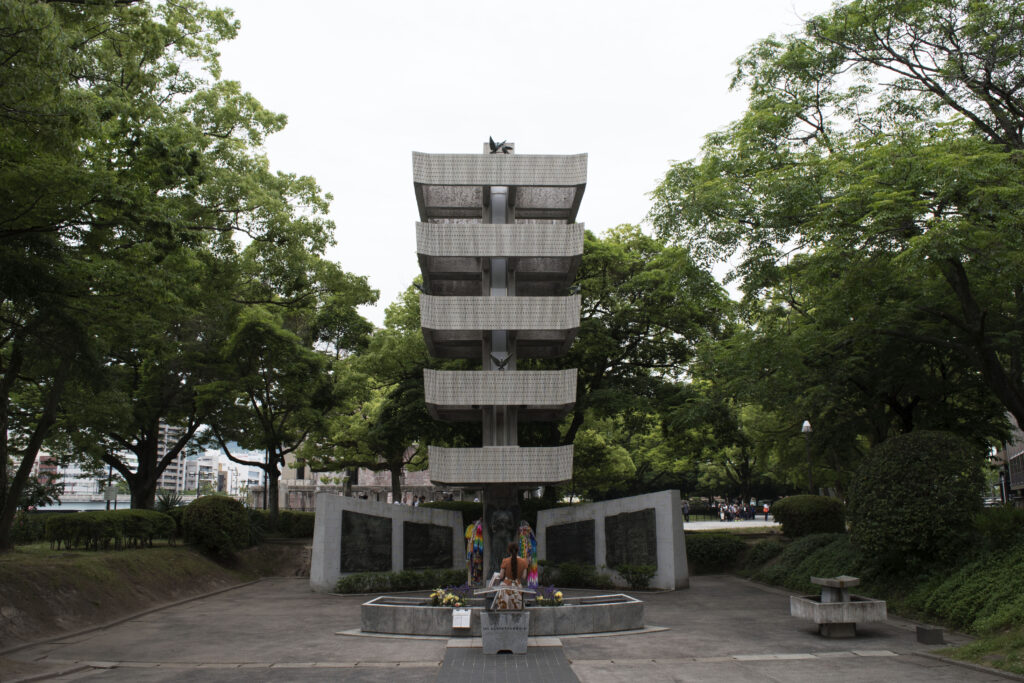 During the tour, I asked our guide what the perception of Americans was for the people of Hiroshima after this tragedy. She said that in the days that followed, the survivors had no time to think about the war. All they wanted to do was get back to their normal lives and find their loved ones. There was no time for hatred. As the weeks went by, more and more Western organizations and individuals, many from the United States in particular, went to Hiroshima and brought food, water, and things to help the kids. They helped rebuild the city. It was then that many survivors realized that the propaganda their government had been feeding them about Americans, the demons on earth, was false.

Strangely, that was the first moment the United States had been mentioned between us. The entirety of the tour had been based around the effects of the bomb and hope for a better future. The United States wasn’t even mentioned until near the end of the tour, where there stood a section about WWII history for those interested. The bombing of Hiroshima was spoken of as if it was a natural disaster: a bomb was dropped and an entire city was destroyed. At the museum, it isn’t recognized as an act of merciless violence from one country against the civilian population of another. The bombing is seen as a disaster of human nature. The city stands as an example of the dangers of nuclear weaponry and lives as a reminder that such a disaster should never happen again. 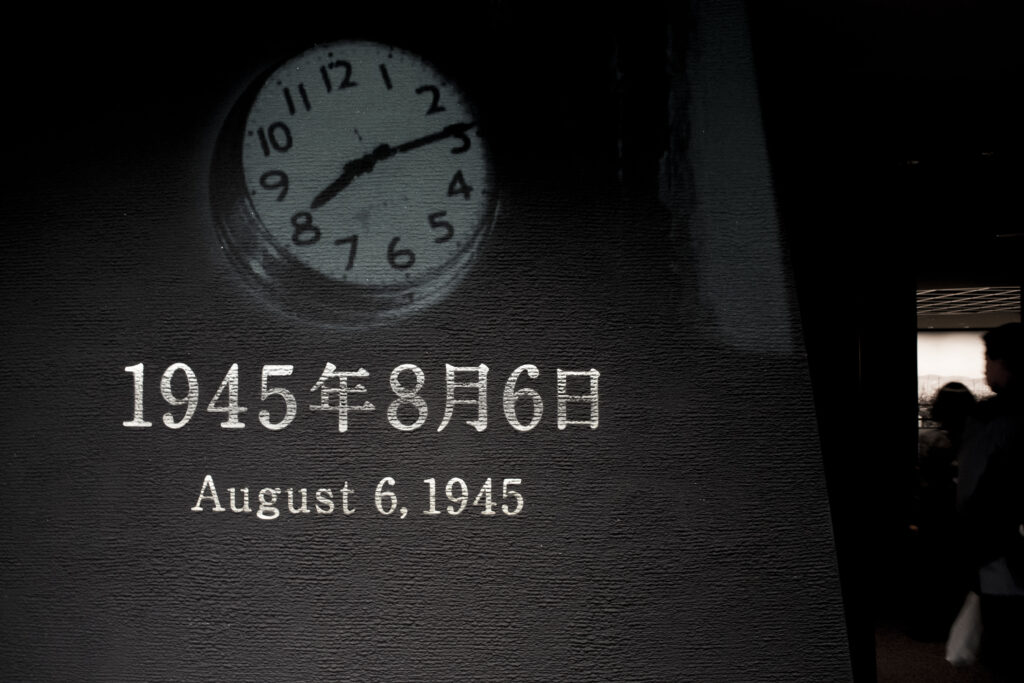 That was what I found to be the most powerful aspect of the museum. It wasn’t about the violence between the Americans and the Japanese. It wasn’t about governments hating each other, with one bombing the other’s territory. It was about people killing other people and how wrong that is, not just at the scale of an atomic bomb attack but on any scale. There is a unity that has been created here, at ground zero, in the hope for a denuclearized future. It’s a hope that transcends borders. 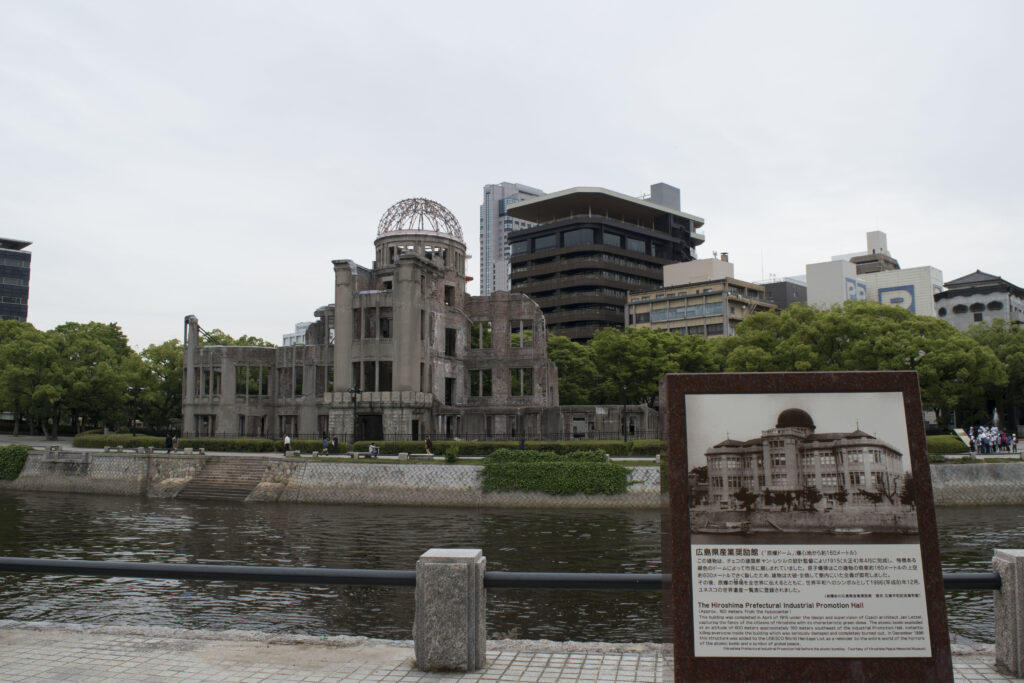 I visited Hiroshima in the months before the meeting scheduled to take place in Singapore between President Donald Trump and DPRK Leader Kim Jong-un, when this issue of denuclearization was once again a massive talking point on the world stage. The issue remains prevalent today and there are many questions still to be answered. Is it possible for humans to ever live in a world without these weapons again? Is it possible for the governments of the world to trust each other enough to stop stockpiling enough firepower to wipe entire countries off the face of the earth? I’m not sure. What I do know is that the ruins of the Hiroshima bombing still stand as proud and solemn monuments of the direction humans can take the world if they aren’t careful.